I didn’t sleep well the night before race day.

I knew physically I could run 10km but it was the emotional side. I was running for Nigel…in this memory to celebrate my husband’s love of life and sport. It was also on Daddy’s Bucket List to get me fit, healthy and happy.

Nigel died on 1 March 2014 and here I am some 4 1/2 months later running for him, me and my children to give me strength, courage, focus and energy to carry  on life without Nigel by my side.

The alarm went off at 7.05am. I showered, had breakfast and put my running gear on. Then I woke the children and they had breakfast, dressed and packed their toys for their Grandparent’s house. I was strangely quiet not wanting to be cheerful or sad so I settled on being focussed.

The kids arrived safely at the Grandparents and then I switched cars as there were 4 of us running the race for different reasons.  We were early so we went to McDonald’s for my second porridge breakfast which I needed as I didn’t eat much of my first breakfast.

We continued on to Gateshead Stadium … when I get nervous, I talk alot …and I talked and talked promising for the next race not to talk too much! I started training on 5 June 2014 and before that I had’t run outside for 16+ years!

Bags were left at the baggage area and we continued to the start. The 4 girls decided to start together so ignoring all the different waves we headed to the last wave – pink. The atmosphere was great and friendly, the weather wet and initially cold while we waited with bin bags on to keep us dry.

The elite runs, and the various waves started then eventually it was our turn and we were away.

Goal 1 was to start the race … completed!

The weather changed to wet and warm while we ran the course down to the riverside and then slowly we started to climb the long way back up hill. Four  hills and then we were in the Stadium. There were still 300 metres of the track to complete until I reached the finish line. That seemed the longest part of the race as I looked at my stop watch trying to run faster …. but I did pass the finish line eventually!

Goal 2 was to finish the race …completed!

I looked for the girls in my party. Two had already completed the race and one was just behind me. We all hugged each other and then stumbled towards the finishers’ bag and timing chip removal areas.

Goal 3 was to finish the race in under 60 minutes … I knew was close my stop watch said 1 hr 8 seconds but I had forgotted to stop it when I crossed the finish line.

I checked my time online later that night and I had completed the race in 59:51 and my position was 1973! And I have a medal and a T shirt to prove it! So goal 3 was also completed!!!!

What a race and what a day for me.

Now training starts for the Great North Run Half Marathon.

Here is a photo of me at the end  … red faced but so happy to have finshed the race.

Thinking of you Nigel now and always… as my daughter is always requoting me ..Daddy is in our hearts and in our mind – we will not forget him! 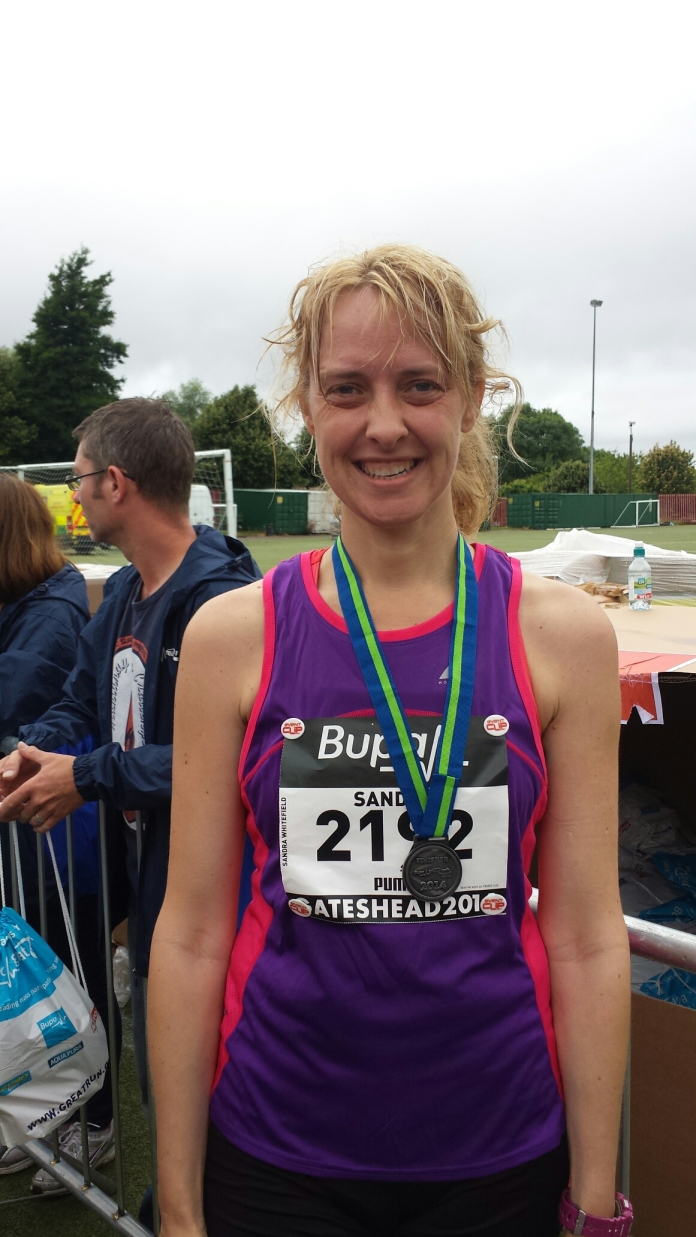